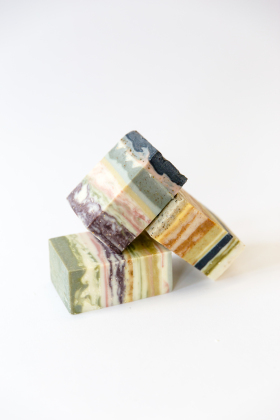 I recently fell in love with these soaps by SallyeAnder. They’re so fragrant and beautiful to look at. After nearly 35 years manufacturing all-natural, hypoallergenic, functional soaps that are sold in over 2,000 stores nationwide, Sallie Austin, second-generation owner of SallyeAnder, has announced the opening of the company’s first-ever retail operation in the historic business district of Beacon, New York. Located at 1 East Main Street, the opening of the flagship store will be celebrated with a party on Saturday, June 17th from 12-6pm. Free of charge and open to the public, the event will feature live music, a soap-making demonstration, a soap-wrapping contest for children 12 and under, food, beverages, and more.

“By opening our first-ever storefront, we will be able to connect directly with consumers after years of focusing primarily on the wholesale market. We are so excited to be part of such a creative, welcoming community, and really look forward to getting involved in a number of ways. We were very deliberate about our choice of location – we wanted something in the beautiful, historic Hudson River Valley, which is not only a tourist destination that has exploded in popularity, but just a truly special place in which to live and work,”  said Sallie Austin, owner of SallyeAnder, wife, and mother of 2 children.

Cost: free of charge, open to the public

Sound like a fun event! Pick up something for dad and your grads!