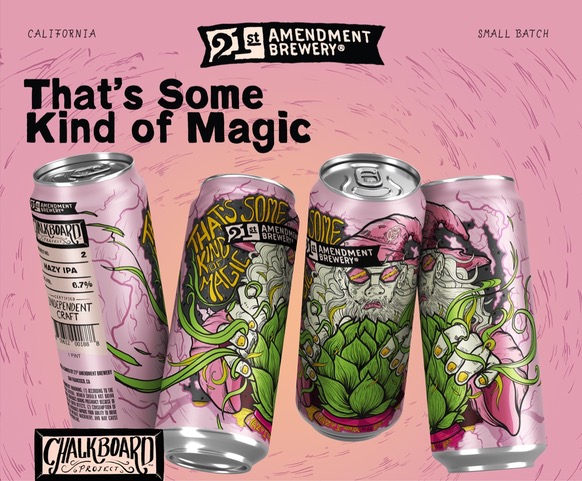 The 21st Amendment Brewery and SF Giants baseball are synonymous with springtime in downtown San Francisco. 21st Amendment opened their Brewpub located 3 blocks from Oracle Park in 2000, the same year the SF Giants stadium debuted in China Basin along the Embarcadero. What better way to celebrate the official re-opening of the Brewpub and return of the SF Giants than with a special small batch release in their new series, the CHALKBOARD PROJECT. The exclusive SF Brewpub beer program the CHALKBOARD PROJECT features astonishingly fresh 21st Amendment limited-edition beers (16 oz. cans in 4-packs) that commemorate the creative minds behind chalkboard designs for thousands of beers at breweries across the country.

A silky and pillowy Hazy IPA, That’s Some Kind of Magic (6.7% ABV) is brewed with Citra, Mosaic, and Idaho 7 hops by Shaun O’Sullivan (Co-Founder and Brewmaster, 21st Amendment Brewery). For 21 years, O’Sullivan and his brewing team have brewed hundreds of small batch beers on the 12-barrel brewhouse with each having originally crafted chalkboard art that hangs as the backdrop to the iconic SoMA bar. For the design of That’s Some Kind of Magic, digital illustrator Dylan Drebitko (@Drebitko_Design) hand-drew the mystical figure featured on the 16 oz. can emulating both the otherworldly uniqueness of the beer itself and distinct artwork.

“Since the day we opened our doors in 2000, we’ve been making small batches of handcrafted beer, experimenting with flavors and styles and ingredients,” says Shaun O’Sullivan. “Every new beer gets a fun name and a hand-drawn chalkboard plaque, introducing the beer to the public for the first time. The beer itself is art, and the art brings the beer to life. Our ‘Chalkboard Project’ is an ode to all of the artful and creative draft lists throughout craft breweries and bars everywhere. When the limited-edition 16 oz. cans are gone, it’s time to wipe the slate and start fresh. Live in the moment and enjoy them while they last!”

« Chill Out With Alcoholic Freeze Pops

The History and Mystery of King Kamehameha’s Brewer »