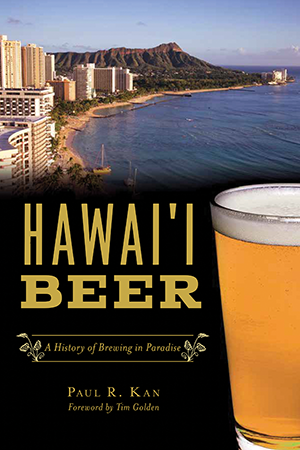 Except from Hawai’i Beer: A History of Brewing in Paradise By Paul R. Kan; Foreword by Tim Golden

Ironically, more is known about Hawai’i’s first beer that was brewed
offshore than the first beer that was made onshore. Adding to the
irony, the first European to make beer in Hawaii wasn’t from a country
known for its beer tradition. Thirty-four years after Captain Cook ordered
the brewing of beer on his ship, a Spanish advisor to King Kamehameha
named Don Francisco de Paula Marin noted in his journal that he made
beer onshore. But unlike Cook’s beer, we don’t know what ingredients
Manini, as the Hawaiians called Don Francisco, used in his beer, how he
made it or whether it was any good. And these aren’t the only mysteries
surrounding the king’s brewer.

Manini was more than a brewer; without him, there might not have
been a Kingdom of Hawaii. The finer details of his early life are unknown,
and what is unknown or unrecorded often becomes legend or lore. Before
his life as Manini, Don Francisco was believed to be the pilot of a Spanish
ship, but he deserted it near what is present-day Vancouver Island, Canada.
His eventual arrival in Hawai’i is subject to debate. He either hopped on
an American vessel bound for Hawai’i or got drunk while helping load
a ship with supplies and woke up, surprised to discover that he was on
his way to the Islands.21 The reasons he ended up in Hawai’i will likely
never be known, but he brought with him a wealth of knowledge that an
ambitious Hawaiian chief named Kamehameha used to his advantage.
Manini was able to procure firearms and train Kamehameha’s forces to use
them against rival island chiefs. With Manini’s assistance, Kamehameha prevailed in the 1795 Battle of Nu’uanu on Oahu that led to the unification
of the Hawaiian Islands under his rule.

As a reward, Manini became one of King Kamehameha I’s most trusted
advisors. He became the king’s translator, accountant, tailor and physician.
He was so close to the king that he was reportedly one of the last people
to attend to Kamehameha before his death. As one of the king’s closest
confidants, Manini was granted vast acreage in present-day downtown
Honolulu, and he was given possession of what is now called Ford Island
in Pearl Harbor. On this land, Manini became an active horticulturalist. As
one person described him: “Marin was a one-man agriculture experiment
station.”22 He introduced many of the fruits that have long since been
associated with Hawaii, like guava, mango and pineapple. He also grew
avocados, limes, oranges, coffee and many other fruits and vegetables.
Vineyard Boulevard in downtown Honolulu is named after the area where
he grew his grapes for making brandy and wine.

But did he grow the ingredients to brew beer? He may have. Being from
Spain, where wheat beer had been produced since the sixteenth century,
Manini may have first thought to make beer from wheat.23 After all, Manini had experimented with growing wheat in Honolulu. However, the soil and
climate were disappointments for cultivating the grain, and it appears that
he gave up trying. Manini did grow corn and rice, which also could have
been used to make beer. Spanish sailors and soldiers on expeditions routinely adapted and made beer with other ingredients, like corn and rice. As for hops, the tropics were not ideal for growing them, and nothing suggests that Manini ever attempted to plant or harvest hops.

Manini may have improvised and adopted a well-known Russian beer-
making technique. Manini encountered many Russian sailors in the region

where he deserted his vessel before coming to Hawai’i, and the Russians
were a growing presence in Hawai’i during his time as King Kamehameha
I’s advisor. Russian sailors often fermented bread soaked in water to
produce a type of non-brewed beer called kvass. Could the first European
beer made in Hawai’i not have been brewed at all? It’s possible. But it’s
more likely that Manini, if he didn’t grow the needed ingredients, used
his trading skills to acquire beer-brewing ingredients in a number of other
possible ways. He was away from Hawai’i at times and may have picked
them up during his travels. Plus, when in Hawai’i, Manini routinely wrote
to ask his friends and acquaintances in California, Mexico and South
America to send him plants and seeds, but we don’t know for certain if
they ever sent the ingredients for making beer.25 He also met many traders
for review only who were visiting Oahu because, in addition to getting a grant of land, the king permitted Manini to run a saloon and boardinghouse for sailors at the makai end of present-day Nu’uanu Avenue near Honolulu Harbor. Manini was in a perfect location to get the ingredients for beer from traders and sailors visiting his saloon and boardinghouse.
Portrait of King Kamehameha I. Courtesy of Wikimedia Commons.
for review only

Manini’s saloon and boardinghouse may also help answer another question
of who drank his beer. It probably wasn’t the king or Hawai’i’s nobility.
According to Manini’s journal, he and the royal family of the kingdom were
often drunk on the brandy and wine he made. In fact, the nobility liked
these drinks so much that Kamehameha placed a kapu on Manini’s vineyard, forbidding anyone to touch it except for Manini and his workers. Perhaps more telling is that, in all his journal entries about drinking with the royal court, Manini never once mentioned beer—nor did the king ever place a kapu on anything connected to Manini’s beer brewing.
If the royal court was not drinking his beer, the second entry about beer
in Manini’s journal makes it nearly certain that he was making his beer for
seafarers. On December 7, 1815, he wrote, “This day, I made a little oil and
a barrel of beer for Captain Tela.”26 “Captain Tela” was Captain John Tyler,
the master of the merchant ship Isabella, who likely purchased Manini’s beer for his crew.

Manini and Captain Tyler appeared to be close friends. In the nights after
the beer was made, Tyler and Manini went on a drunken bender together.
On one night, Tyler had to carry a drunk Manini back home after a dinner
party.27 On another night, Manini was forced to return the favor—Tyler’s
drunken antics caused a near riot among the local Hawaiians, requiring
Manini to get out of bed and calm them down.28
As for the kind of beer Manini made, it was certainly ale and not lager.
This is based on another essential ingredient needed to brew beer—yeast.
The discovery of yeast as a critical part of the brewing process did not
happen until later in the 1800s. Because he didn’t use yeast and relied on

“spontaneous fermentation,” Manini’s beer would have been a type of top-
fermenting ale. How he made his barrels of beer is also a mystery. There

is no record that he had sophisticated brewing equipment and may have
relied on rudimentary items to produce wort, separate the grain, move
the wort into a mash tun, (possibly) add hops and then move the mix to a
fermentation container.

But how did Manini’s beer taste? Well, there weren’t any potential
uprisings, as happened with Cook’s brew. That’s the good news. The bad
news? In an age before the ice trade and refrigeration reached Hawai’i,
Manini’s ale would have been warm fermented in a wooden barrel. In order for fermentation to occur, he would have tried to keep it somewhat cool.

However, even the most careful brewer of the day in the hot conditions of
the tropics would not have been able to prevent a top layer of moldy foam
forming as the brew fermented. Insects attracted to the fermenting liquid
for review only

would also have been an issue. A spontaneous fermenting ale like this one
would have been ready to pour in fewer than ten days if it didn’t spoil during fermentation. Had Manini been able to add hops, they would’ve acted as a preservative and allowed for the beer to last a few days. With such little time to ferment, the beer may have only been, at most, 2 percent alcohol. When the beer was ready to serve, it would’ve been at room temperature. By today’s standards, the review of Manini’s beer on the beer rating app Untappd would have been brutal.

But in today’s Hawai’i, Manini is nonetheless commemorated. While the
many mysteries of Manini’s beer making are likely never to be solved, he
is ever-present in the daily lives of many people who live and work near
downtown Honolulu. Marin Tower, a high-rise in Honolulu near the site
of his old saloon and Marin Street close to present-day Nimitz Highway
are two notable examples of his presence on the island. And although we
may not know a lot about Manini’s brew, he undoubtedly contributed to
the evolution of Hawai’i’s history while setting the stage for today’s beer
brewing in the state. Many of the plants he introduced, like coffee, guava,
mango and pineapple, have become familiar ingredients in the craft beers
that are still being made around the Islands.

« That’s Some Kind of Magic

Add Rose to Your Memorial Day »