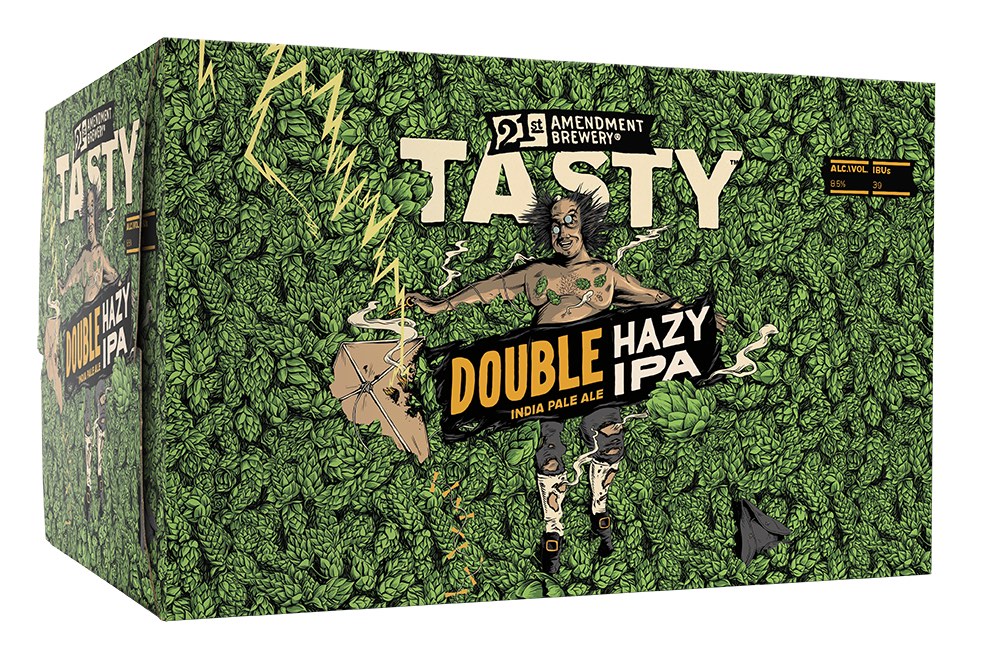 An ode to inventiveness and the genius inside us all, the 21st Amendment Brewery brews a new Double IPA in its hop-forward Tasty lineup for the nationwide release of Tasty Double Hazy IPA (8.5% ABV) in June 2021. The creative packaging artwork for Tasty Double Hazy IPA features Founding Father and polymath Ben Franklin lying in a field of hops following one of his famed kite experiments. Franklin was a brilliant mind fostering one big idea after another. In tandem, 21st Amendment was struck with a clever idea of its own to expand their popular Tasty line-of-beers to include a hopped-up Imperial Hazy IPA.

Shaun O’Sullivan, Co-Founder and Brewmaster of 21st Amendment Brewery, cranks up the hop profile on Tasty Double Hazy IPA to 11 with its sheer abundance of Calypso, El Dorado, Mosaic, Amarillo, Idaho 7, and Cashmere hops in the kettle and dry hopping process. A creamsicle orange hazy appearance compliments tropical stone fruit flavors and aromas, juicy guava notes, and a rich creamy malt texture. Soft bitterness and a layer of tartness smooth out Tasty Double Hazy IPA to be a deceptively balanced Imperial Hazy IPA that packs a punch at 8.5% ABV.

O’Sullivan comments, “Our Tasty IPA series showcases how we like to have fun integrating hops whether it’s a Juicy Pale Ale, West Coast IPA, Hazy IPA, or Double Hazy IPA. Beer drinkers love all types of IPAs, especially hazys. Using the right hops in the right beers allows our brewers to be creative and showcase the diverse flavors and aromas that these bold hops have to offer. Tasty Double Hazy IPA has big brash hop layers wrapped around a sweet malt base with its elegant and rich texture. It’s complex much like Ben Franklin’s imaginative ideas, but served in a 12 oz. can or pint glass, of course.”

Tasty Double Hazy IPA will be available in 6-packs and 12-packs in all 33 states where 21st Amendment distributes in June 2021. For more information and to find some using their beer finder, please visit www.21st-Amendment.com.