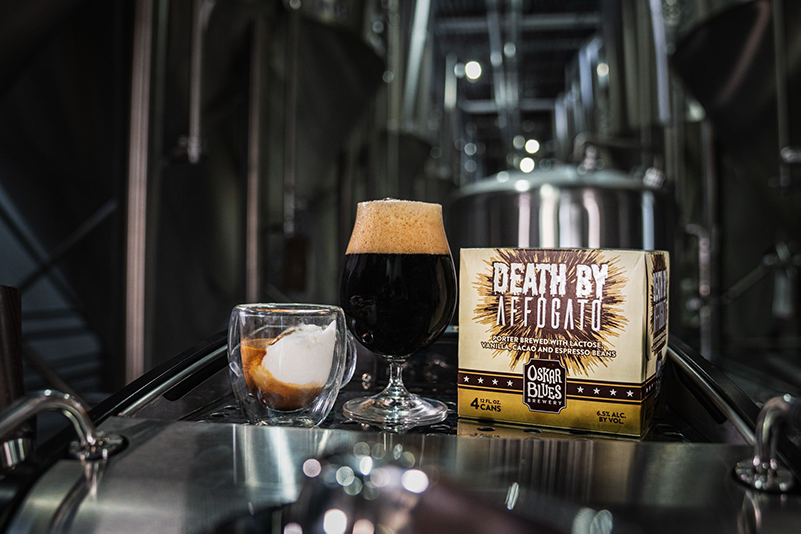 Oskar Blues Brewery announces the debut of Death By Affogato Porter, the second decadent entry in their series of extravagant Death By porters inspired by cult classic Death By Coconut Irish Porter. Death By Affogato is available nationwide in 4-packs of 12 oz. cans now.

Arriving on the heels of Death By King Cake White Porter, Death By Affogato was inspired by a dessert that some may call a little bit “extra.” Affogato is a classic Italian dessert of two simple ingredients brought together to create an exorbitant amount of flavor: vanilla gelato topped with a freshly pulled shot of espresso. With a name that translates directly to “drowning,” this indulgent post-meal treat was the perfect muse for Oskar Blues brewers seeking a formidable flavor profile for the upcoming Death By porter in the series.

“We like to think of ourselves as proudly unpretentious foodies here at Oskar Blues,” said Head Brewer Juice Drapeau. “In a beer like Death By Affogato, we’ve taken inspiration directly from the culinary world. ‘Affogato’ is a fancy name, but forget about that. All you need to know is that ice cream and coffee are a legendary pair.”

Death By Affogato begins with a rich, dark porter brewed with chocolate malt and malted oats to complement roasty coffee and creamy vanilla. Using Spinbot 5000 technology, this malty porter is infused with cacao nibs, hand-split Ugandan and Madagascar vanilla beans and coffee from Colorado’s own Traction Coffee Roasters. The result is a hedonistic beer drowning in flavors of milk and dark chocolate, espresso, vanilla and caramel. Surprising notes of caramelized sugar, toasted marshmallows and breakfast cereal round out a porter appropriate for an aperitivo or a late-night snack.

Death By Affogato Porter is the second offering in the Death By Porter Series. Find it on shelves nationwide in 4-packs of 12 oz. cans. Superfans of the eponymous Death By Coconut can expect the return of the cult classic this fall.