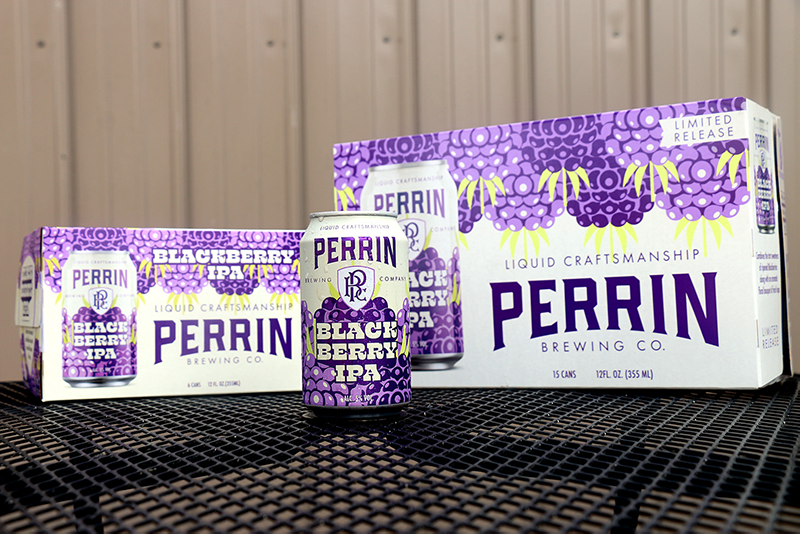 Michiganders know the juicy joys of tasting fresh, wild-growing blackberries right from the vine. The late summer berry has inspired Perrin Brewing Company’s Blackberry IPA, a seasonal brew that will return to the taproom August 27, with Michigan-wide distribution to follow.

Blackberry IPA (5% ABV) combines the tart sweetness of ripened blackberries with an aromatic, floral bouquet of fresh Michigan bittering hops. First brewed in 2015, Blackberry IPA was the first Perrin seasonal brew to be packaged in cans.

“It’s a Perrin favorite year after year,” said Director of Brewing Operations Connor Klopcic. “It’s approachable to all, and has a nice malt body to balance the ripe sweetness of real blackberries.”

This year is extra special for this specialty, as it returns with an updated can design. Bold Blackberries appear on the new can, promising juicy berry flavor inside. “With the new can design, people can expect the same Blackberry IPA that they have always enjoyed,” said Klopcic.

Blackberry IPA will appear on draft and in 6-packs and 15-packs of 12 oz. cans starting August 27. See the latest updates on taproom operations here, or find Blackberry IPA on shelves near you via the beerfinder.

« LastObject’s Mission to Save the Environment