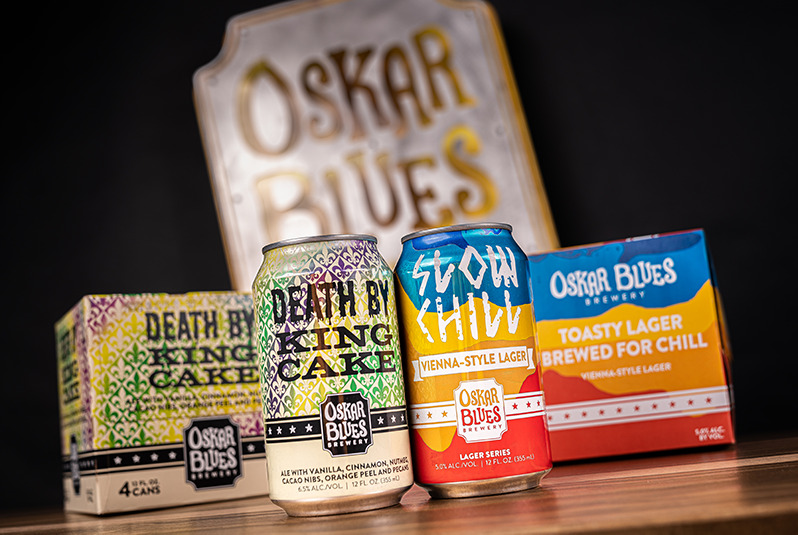 Oskar Blues Brewery will delve even deeper into lagers and porters in 2021. The Slow Chill Series of classic, crisp lagers and the Death By Series of decadent porters will both see nationwide release for limited runs throughout the year. This year’s Death By Series will include a brand new release, to be announced May 1.

Death By Series of Decadent Porters
First concocted in 2013, Death By Coconut Irish Porter remains one of the highest rated and most sought-after beers in the Oskar Blues lineup. In 2020, the Death By Series was born and included three over-the-top indulgent porters crammed with heavy-handed additions of premium ingredients.

In 2021, Death By King Cake White Porter (6.5%) returns at the head of the parade as the first limited-release porter in the series. Like its namesake, the official dessert of Mardi Gras and Carnival, this porter is packed with flavors of cinnamon and nutmeg with orange and pastry notes rising to a party pitch on your palate. Who needs a plastic baby? This porter is enough to make you king for a day. Death By King Cake White Porter is now available for a limited time in 4-packs of 12 oz. cans.

The mid-year beer in the Death By Series is a brand new release, hot off the griddle, to be announced May 1. Stay tuned for more information on this all new Death By entry. Finally, the original cult favorite, Death By Coconut Irish Porter (6.5% ABV), returns in the fall to round out the series and delight longtime fans with cacao and coconut turned up to dangerous levels of decadence.

“The waiting is tough,” said Aaron Baker, Sr. Marketing Manager for Oskar Blues Brewery. “Chilled throughout their long fermentation, these beers take a while to perfect. Keeping our production team from drinking it all before it hits the canning line might be the hardest part.”

The series begins in 2021 with a Vienna-style Lager (5.0% ABV), a beer celebrating what malts mean to lagers. With biscuity, toasty undertones and a cool, dry finish, this lager drinks best out of doors with a long-range view. Slow Chill Vienna-style Lager is available now for a limited time in 6-packs of 12 oz. cans. A Munich-style Helles arriving in May and a Dunkel in September will complete the year’s Slow Chill Lager Series.

By offering rotating series of both lagers and porters, Oskar Blues keeps the beer fridge fresh all year long. For the latest Oskar Blues news, sign up for emails about new beer releases, upcoming events and promotions at https://www.oskarblues.com/