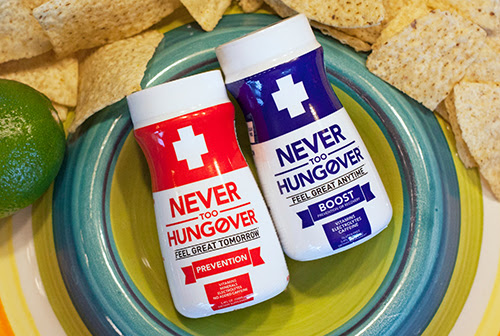 Never Too Hungover, the nation’s leader in the budding hangover prevention/recovery category, is thrilled to report that Memorial Day Weekend, the holiday Americans consider the official start of summer, is nearly here. It’s time to prepare for the occasion with a mix of tradition and healthy innovation.

If you’re planning to attend a party, throw a party or just chill and enjoy a few holiday beverages, what better way to ensure you, your friends and family enjoy the entire weekend – than with Never Too Hungover, the ultimate hangover prevention and recovery formula.  Now you can work hard, play hard and feel great the next morning after the holiday.

2. Etiquette dictates that Memorial Day Weekend is the perfect time to bring your party host or hostess a gift. Stand out with the usual gift of wine or beer with a case of Never Too Hungover so all the guests can celebrate the healthy way — and wake up feeling their best and brightest the next morning.

3. While technically there is no law stating you must celebrate and imbibe on this holiday weekend it is, in fact, legally required to observe a National Moment of Remembrance. In December 2000, Congress passed a law requiring Americans to pause at 3 p.m. local time on Memorial Day to remember and honor the fallen.

4. Around 62% of Americans plan to barbecue over the weekend. Unfortunately, 25% more home cooking fires than average happen on Memorial Day. Keep a close eye on your open fire and don’t cook too near a building. Be sure to keep a fire extinguisher nearby, and a six-pack of Never Too Hungover in your ice chest or refrigerator.

5. Two of the biggest car races of the year, and major Memorial Day social events, will take place. The NASCAR Coca-Cola 600 Race in Charlotte, North Carolina and the Indianapolis 500 in Indiana.

6. Memorial Day was first observed by placing flowers on the graves of Union and Confederate soldiers on May 30, 1868. After World War I, Memorial Day was changed from honoring Civil War dead to honoring Americans who died fighting in any war.

8. Memorial Day was formerly known as the Decoration Day.

9. The longest running Memorial Day parade takes place in the town of Ironton, southern Ohio, where they have had a parade every year since 1868.

10. Attended by more than half a million people, The National Memorial Day Concert is performed on the west lawn of the US Capitol Building in D.C. to pay tribute to the Nation’s fallen soldiers.

Hungover… be gone. Happy {safe} drinking this weekend everyone!