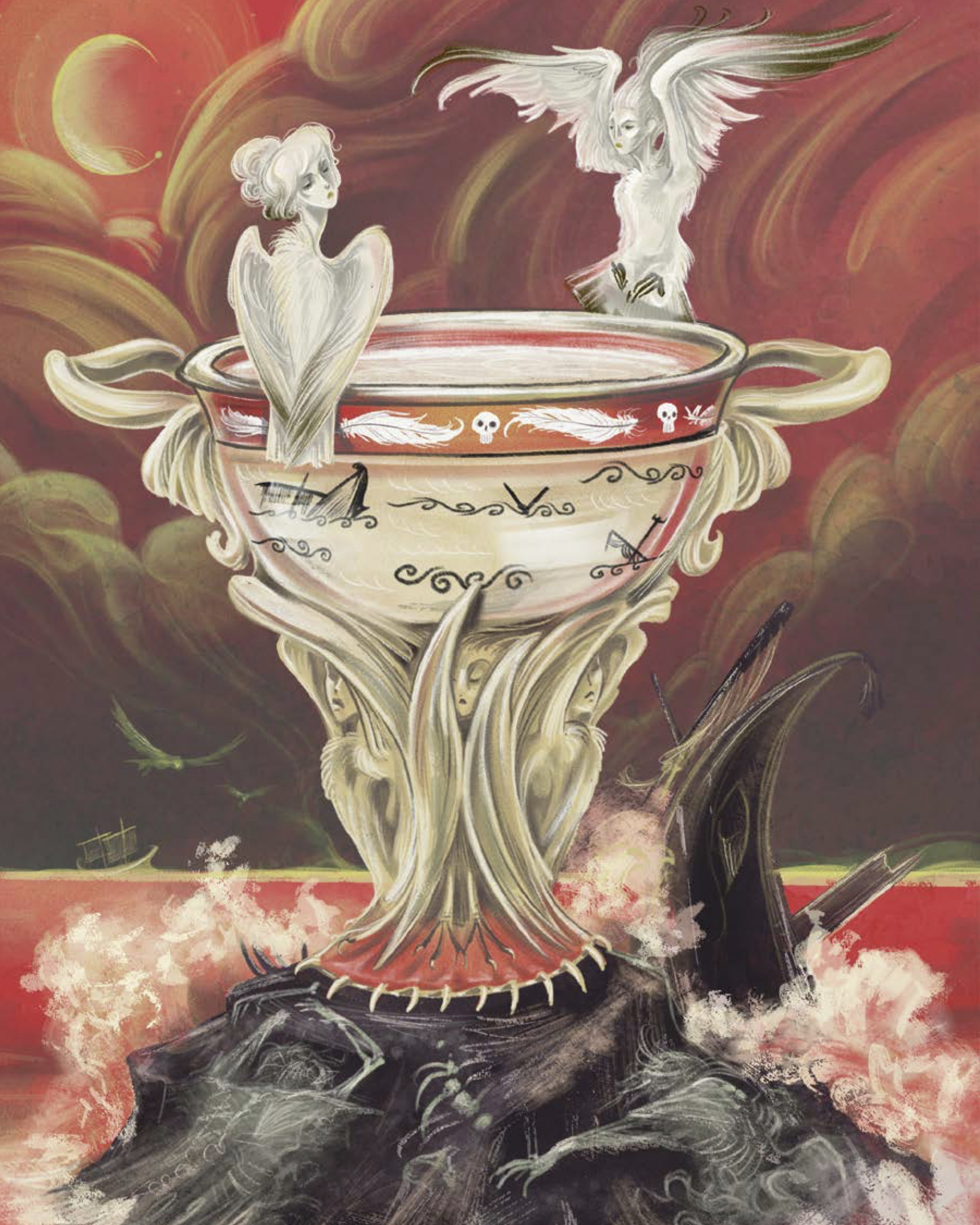 Excerpted from Nectar of the Gods by By Liv Albert and Thea Engst Illustrated by Sara Richard. Copyright © 2022 by Simon & Schuster, Inc. Image Credit: Sara Richard . Used by permission of the publisher. All rights reserved.

Keep some wax ready to block your ears or be prepared to lash yourself to the mast of your ship—there are Sirens nearby. The Sirens were three bird-women (in most depictions they’re birds with women’s heads!) who lived on the mythical island of Anthemoessa and lured sailors to their deaths with their alluring songs. The origin of the Sirens varies by source: In some they were born like that; in oth- ers they were originally handmaidens of Persephone who Demeter transformed into birds to help in the search for her daughter. Regardless of their origins, the Sirens are most famous for the role they played in Homer’s Odyssey. Odysseus and his men had to pass by the Sirens’ island on their ship and, thanks to the advice from Circe, were able to pass by unharmed.

Sail right past the Sirens, unharmed by their seductive song, while you enjoy the fruity, tropical delight that is the Siren Seduction. Wave to the bird-women whose seductive skills were always in their song rather than in sexual seduction. The original Sirens were more bird than woman, after all.

With wax safely tucked in your ears (do not actually put anything in your ears), combine the coconut rum, lime juice, Simple Syrup, and banana liqueur in a psykter (a shaker) with ice. Shake well, imagining the song of the Sirens and the lure of its mystery, and strain into a stemmed kylix (a coupe glass) depicting Odysseus strapped to a ship’s mast. Garnish with the rose petals for the flowery Siren island of Anthemoessa. Best enjoyed in the hot Mediterranean sun.

In order to pass by the Sirens, Odysseus had all of his men block their ears with wax so that they couldn’t hear the Siren song. Meanwhile, Odysseus wanted to experience the song himself, so he had his men tie him tightly to the mast of his ship so that he could hear the music but not be able to escape the confines and so could survive hearing their song but not be lured away by it. Odysseus was nothing if not over the top.

UMBO is using Functional Mushrooms to Transform Health and Wellness »