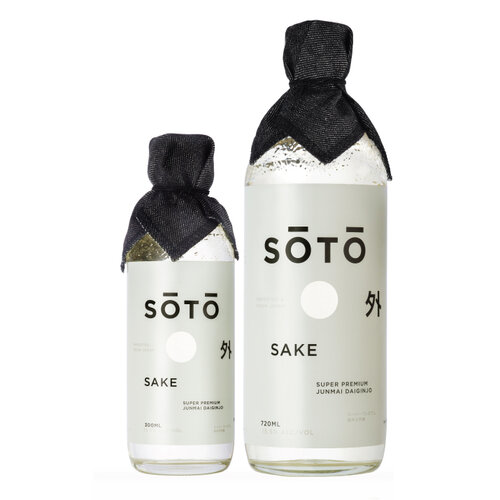 Japanese sake, one of the fastest growing alcohol categories in North America over the last decade, is expected to expand by a further 51% by 2022. One prominent beneficiary of this consumer trend: SOTO Sake, an award-winning, premium Japanese sake brand produced in Niigata, Japan is sold in thousands of locations in the U.S., Canada, and Europe.

The SOTO brand is dedicated to the craftsmanship, quality and purity of taste of “Japanese sake,” the moniker of which is used only for sake that is actually produced in Japan. This month, SOTO Sake is pleased to announce that Japan-born pro tennis phenom Naomi Osaka has joined the brand as both an investor and creative consultant. Her role was formalized this summer.

The soft-spoken Osaka is the winner of the 2018 US Open and 2019 Australian Open, and is emerging as a prominent symbol of cultural diversity and exemplary, humble grace and sportsmanship.

“Naomi’s elegant, serene demeanor and philosophical outlook on her life and young career are big reasons we wanted her to be involved with SOTO,” says Billy Melnyk, who co-founded the brand with business partner Dan Rubinoff. “Appreciating true Japanese sake is a transportive and enlightening experience, and we wanted our first publicly celebrated investor to embody that.”

“As a native of Japan, I am proud to be involved with a product that is authentically Japanese, said Naomi Osaka. “SOTO’s status as a made-in-Japan, traditional ‘Japanese sake’ is another major reason I’m supporting the brand.

Melnyk and Rubinoff created the SOTO brand to be an artisanal symbol for global social drinking, based on the restraint, beauty and discipline of Japanese culture. “We’re sharing the traditions of Japan through SOTO Sake’s modernized form, introducing the drinking experience of sake to more people, and contributing to the category’s increased popularity.”

In her role as a creative consultant to SOTO, Osaka (who was coincidentally born in Osaka, Japan) will lend her generational and cultural insights to the brand as it grows and promotes itself, with proper responsibility, to a new generation of social drinkers. SOTO intends to use Naomi’s emotional and cultural intelligence, and her growing status as a role model for women of all ages and races, to introduce historic elements of Japanese culture and craftsmanship to millions of people around the world through the brand’s marketing and the experience of enjoying Japanese sake.

Says Melnyk, “Having worked with many global liquor brands and high-profile personalities for over 15 years, I wanted SOTO to take a different path to introduce its beautiful Japanese sakes to the world. This is a discerning drink for an educated, global citizen, and I love the idea that Naomi will help us do that tastefully, graciously and with the same focus and will she demonstrates on a Grand Slam court.”