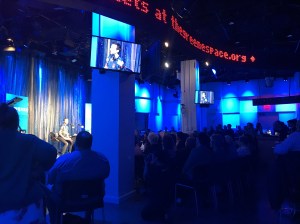 This piece was originally posted on WhereNYC on April 25th

What do clay sculptures, a James Beard award-winning chef, and some of the most amazing voices in opera have in common? Usually absolutely nothing, but this Monday night an eclectic group of artists all came out to Greene Space at WQXR and WNYC to put on an absolutely one of a kind performance called Mistaken Identities, which is the first of three installments of The Opera Party series. These well-known and recognizable names in the New York art scene came out to entertain.

The very talented and hysterical Met Opera Star Anthony Roth Costanzo, a well-renowned countertenor (a man who sings like a girl for you non-opera readers), hosted this opera shindig with co-host with the F. Paul Driscoll, Editor-In-Chief of Opera News, where they explored reinvention and an alternate reality in opera and art. provide that anything was possible during the duration of an hour. Anthony held court and you didn’t need to be a major opera buff to fully get a chuckle.

At one point one bass-baritone Davóne Tines performed a lullaby before his interview. He adored a homemade Donald Trump mask while singing and cutting an apple with a knife… Obviously political but it was also an intriguing symbolism for the audience to figure out.

In between performances, the food was served from the clay turkeys made by Doug Fitch. Audience members used small mallets to open it inside to find peanuts shells filled with marshmallows and muscles with caramels. Odd no? Costanzo mentioned the statues and the peanuts were not what they seem –just like opera… This was one of many surprises. Also James Beard Award-winning chef Patrick Connolly from the Brooklyn restaurant Rider who put together deceptive food like turnips shaped like scallops… They were delicious.

The grand finale of the party was an interview with F. Paul Driscoll. At the end of the interview, Driscoll stayed on stage while Costanzo disappeared from the stage and reappears in a class radio booth behind the audience singing and opera.  Driscoll interpreted the motions of Costanzo’s hand gestures as the contender use his hands to show the emotions of being “cold” to “showing off his manicure’.

Mistaken Identities was loveable, contemporary and flat-out just funny. Fans of opera and comedy will simply love this. Not an opera connoisseur? That’s okay! The performances are designed for anyone to understand and admire these true artists.

Missed this performance? Have no fear! There will be another performance on Monday, May 15, 2017, and Thursday, June 22 at 7 pm.

The second installment, “Secrets of the Opera” on May 15th, the audience will find out everything from backstage gossip to onstage disasters. Revel in the splendor of Met Opera star Ailyn Perez and amuse bouches by chef Antoine Westermann of Le Coq Rico. Co-hosted by writer, storyteller, and performer Justin Sayre. Lastly, the third and final installment “Pride Without Prejudice” on June 22, WQXR will celebrate NYC Pride Week. The event will feature performances by cabaret artist Justin Vivian Bond and tenor Anthony Dean Griffey, a surreal confection by cake-maker Elizabeth Hodes, and enticing opportunities to show off just how much pride you feel.

Tickets are $30 per event and are available at thegreenespace.org