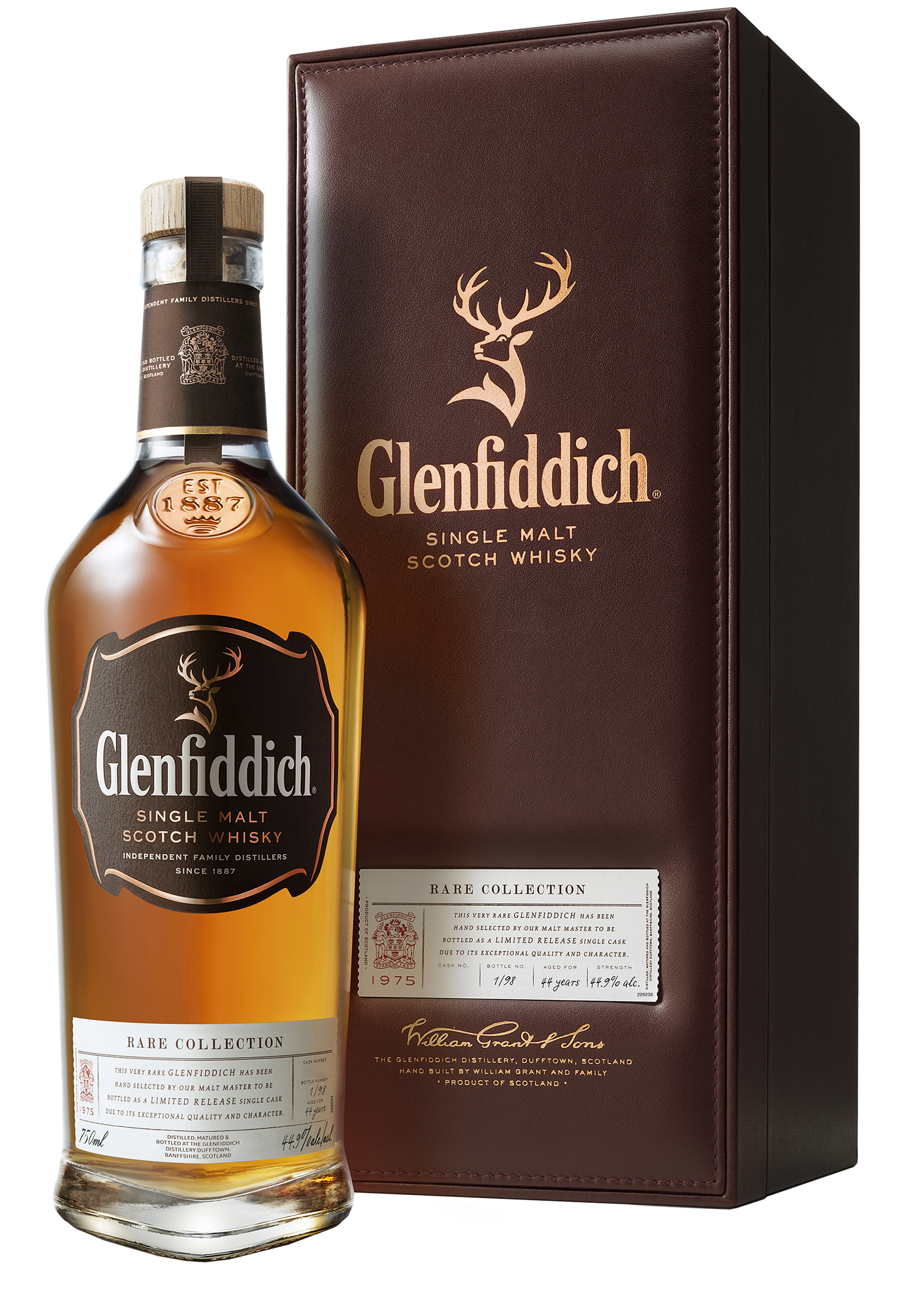 Glenfiddich – the World’s Most Awarded Single Malt Scotch Whisky – offers true connoisseurs a once in a lifetime drinking opportunity with the third release of its Rare Collection: Glenfiddich 1975 Vintage Cask 4706 and Cask 5114. The Rare Collection Series, introduced in the 1990’s, is a selection of a small number of outstanding casks reserved and hand selected by Glenfiddich Malt Master Brian Kinsman. Released individually as single casks, both Cask 4706 and Cask 5114 are exclusive to the United States with only 100 bottles of each available.

Aged 44 years, this exceptional and limited-edition pair encompasses whiskies laid down within a week of each other in 1975 in the cool, dark vaults of the Glenfiddich distillery warehouses. Perfect complements to one another, Cask 4706, aged in a European Oak Sherry Butt, and Cask 5114, matured in an unusually rare European Oak Hogshead, takes the original Glenfiddich distillery character, from poached pear and vanilla, to new heights with richer, darker and more complex, yet balanced notes.

“Selecting the casks to be a part of the exclusive Glenfiddich Rare Collection is a meticulous but extremely rewarding process,” says the award-winning Malt Master Brian Kinsman. “They must reflect the timelessness of the Glenfiddich character, and the mastery of craftsmanship that has gone into creating the outstanding liquid within, resulting in a selection of whisky that is truly beyond compare.”

This distinctive and rare rich gold whisky has a lively and vibrant bouquet imparting notes of oak, antique leather, tannin and crisp parchment, while maintaining its intriguing zestiness with hints of green apple and citrus. At first sip, a silky-smooth mouthfeel is welcoming with a creamy vanilla sweetness followed by a long-lasting finish of mellow oak, toasted almonds, banana and spring blossom.

A beautifully rich and complex dark amber whisky envelops the nose with an intense spicy oak character and layers of dried fruits. An initial burst of sundried raisins and vanilla gives way to more subtle notes of cinnamon, nutmeg and caramelized apple. Once tasted, the first wave of flavor is a powerful expression of the Glenfiddich distillery character taken to new levels with essence of spicy oak and fruit, followed by unfolding notes of apricots, prunes and dates, concluding with woody spice, toasted macadamia and rich fruit cake.

Both vintages were bottled at cask strength and are non-chill filtered. Each bottle is then individually numbered and presented in a handcrafted brown Italian leather box with a copper foiled leaflet containing detailed information about the bottling. With only 100 bottles available of each cask, these latest releases are meant to be savored and cherished until the very last drop, as once they’re gone, they can never be recreated.

and today is one of the few remaining family-owned and operated distillers.  From dream to dram, the Glenfiddich journey began in 1886 when founder, William Grant, realized his dream of creating the ‘best dram in the valley’ in Dufftown, Scotland.  Equipped with distilling expertise, gained after working 20 years at the Mortlach distillery, Grant purchased the necessary tools for the job and he found his premises in the beautiful nearby field of Glenfiddich, Gaelic for ‘valley of the deer’ that also included a water source provided by the Robbie Dhu Spring, a vital ingredient in the production of quality whisky. The Glenfiddich distillery was born on Christmas Day 1887, when spirit first flowed from the Glenfiddich stills. The combination of crystal-clear water from the spring, home-grown barley, Highland air and the unusually small size of the stills, produced an unrivalled single malt Scotch whisky.

William Grant & Sons Holdings Ltd. is an independent family-owned distiller headquartered in the United Kingdom and founded by William Grant in 1887. Today, the global premium spirits company is run by the fifth generation of his family and distils some of the world’s leading brands of Scotch whisky, including the world’s most awarded single malt Glenfiddich®, The Balvenie® range of handcrafted single malts and the world’s third largest blended Scotch, Grant’s®, as well as other iconic spirits brands such as Hendrick’s® Gin, Sailor Jerry® Spiced Rum, Tullamore D.E.W.® Irish Whiskey, Monkey Shoulder® Blended Malt Scotch Whisky and Drambuie® Scotch Liqueur.

William Grant & Sons has been honored as “Distiller of the Year” by the prestigious International Wine & Spirit Competition and International Spirits Challenge 12 times over the past 13 years, including the most recent award in 2019.