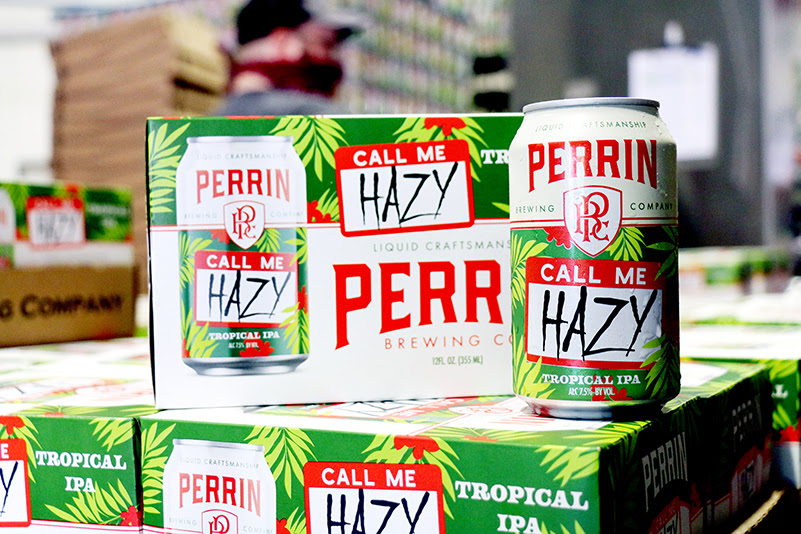 Call Me Hazy – Tropical IPA offers fresh, tropical stone fruit aromatics. With hints of coconut, passion fruit, mango and lime, it’s a first-class ticket to a tropical escape. It pairs well with coconut-crusted fish or carnitas tacos; and is best enjoyed poolside, at the beach or wherever your summer adventure takes you.

“It has a light straw color with an opaque body,” said General Manager of Brewing Operations Sheldon King. “There’s sweet pineapple and coconut on the nose, and the flavor is bursting with tropical fruit.”

The 7.5% ABV brew is the second iteration of Perrin’s rotating Call Me Hazy IPA series, which allows Perrin’s brewers to explore the breadth and depth of hop flavor.

Connor Klopcic, Director of Brewing Operations, said the Call Me Hazy IPA Series was inspired when Perrin’s brewers got their hands on an array of premium hops. “We really wanted to showcase the amazing and unique flavors that these three varieties of hops can produce,” said Klopcic. “Instead of blending them in one beer, we wanted to use them individually so they could each stand out.” Call Me Hazy – Tropical follows the release of Call Me Hazy Juicy, and the third installment in the series will be announced later this year.

Bring your own tiny paper umbrella for this paradise punch. Call Me Hazy – Tropical IPA is now available at the Pub and will appear at craft beer retailers across Michigan soon.