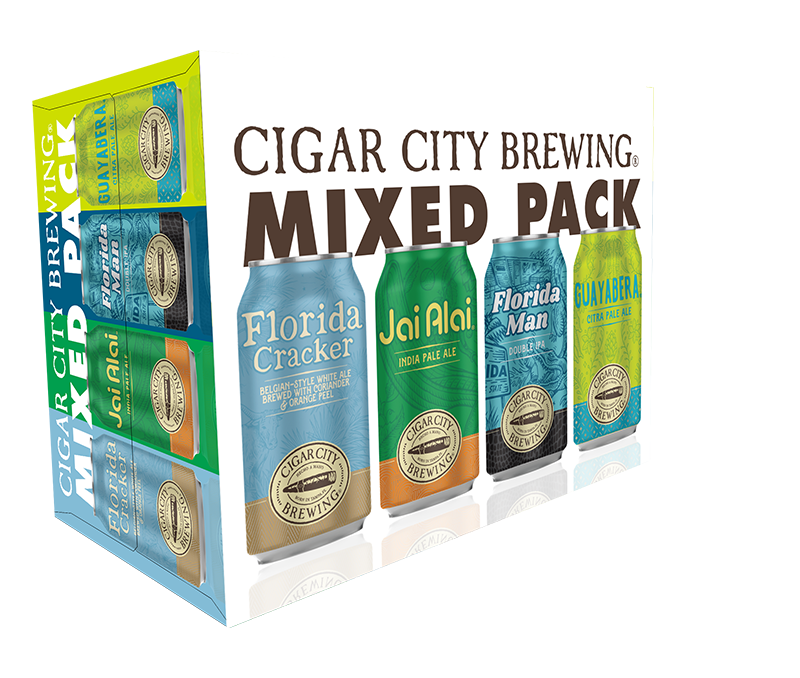 Since its initial release in 2018, the CCB Mixed Pack, consisting of three 12 oz. cans each of four bold, flavorful CCB brands, has been one of the brewery’s top selling packages, finding success not only in grocery stores but in independent bottle shops and craft beer outlets across the United States. The package continues to be led by Jai Alai IPA, the brewery’s flagship beer and one of the strongest IPA brands in the country. Moderate-alcohol Guayabera Citra Pale Ale and Florida Cracker Belgian-style White Ale bring variety to the Mixed Pack by offering lime leaf and orange peel citrus qualities, respectively. In the reimagined Mixed Pack, Florida Man Double IPA will replace Space Pope IPA, an American IPA exclusive to the Mixed Pack.

Inspired by news reports like “Florida Man Throws Alligator Through Fast Food Drive-Thru,” or “Florida Man Attempts to Shoot Oncoming Hurricane,” people in and out of the state of Florida have embraced the wild, eccentric stories that make Florida a singular place in the world of weirdness. Florida Man Double IPA boasts Citra, Azacca, El Dorado and Mandarina Bavaria hops in its recipe, lending notes of nectarine, honeydew and guava to its aroma and flavor. An English ale yeast is employed to add peach esters and a roundness of body not typically found in the Double IPA style. These elements combine with a restrained malt profile to deliver a flavorful, balanced and exceedingly drinkable beer that clocks in at 8.5% ABV.

“We believe that Florida Man Double IPA fits perfectly into our Florida-inspired Mixed Pack,” says Neil Callaghan, Brand Manager at CCB. “The Mixed Pack offers four individualistic brands that represent what our brewing staff is capable of executing, all while staying true to our mission of delivering the highest quality and most consistent beers to the market. Florida Man has never shied away from attention, and we think his namesake Double IPA will get the attention of beer lovers across the country.”

Visit CCB’s website [www.cigarcitybrewing.com] for more information on the Mixed Pack, Florida Man Double IPA and the rest of its dynamic line-up of craft ales and lagers.

« Worried About Your Immune System? Try These 5 Natural Remedies