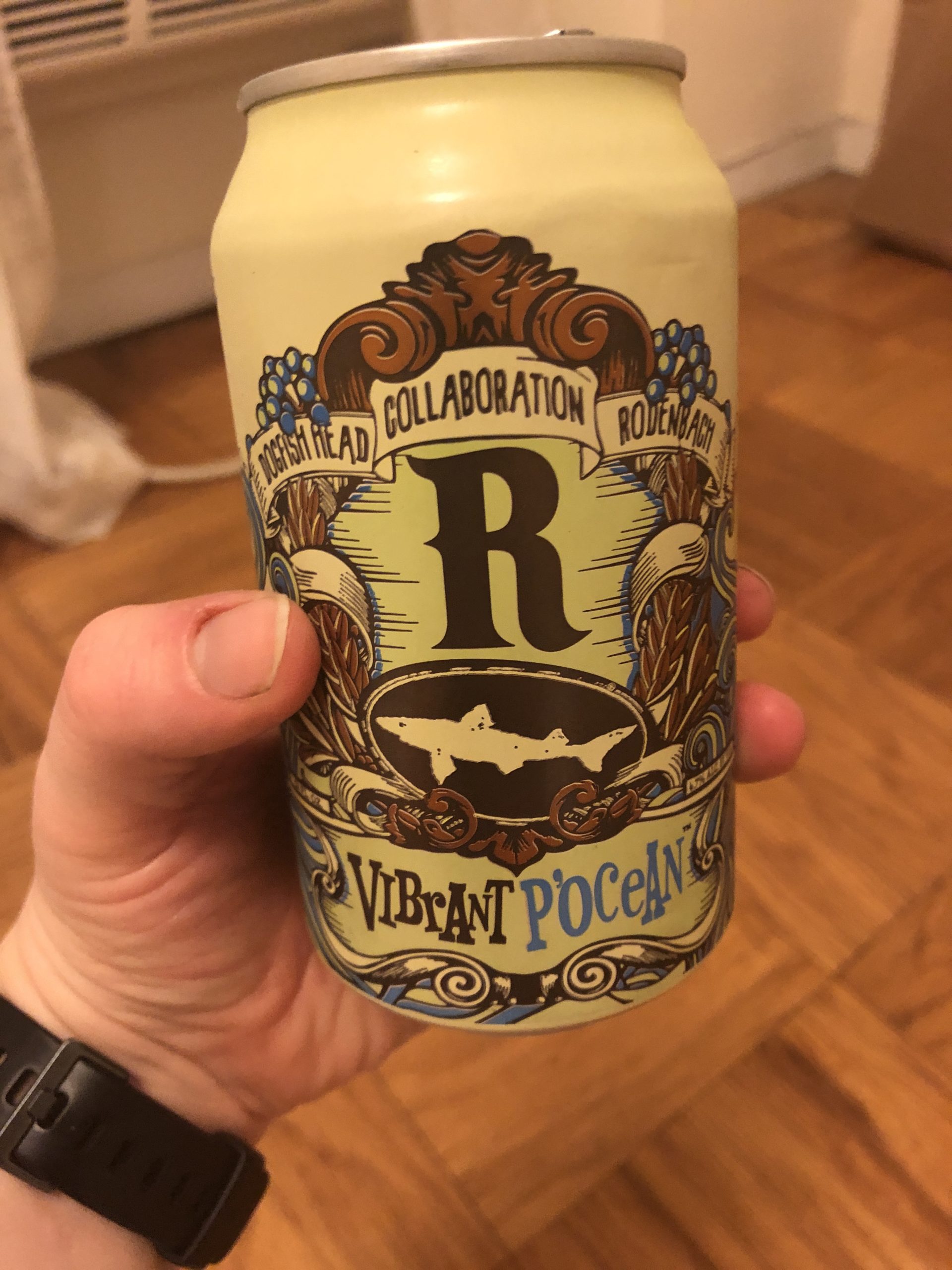 Delaware’s (almost) 25-year-old Dogfish Head Craft Brewery joins forces with Belgium’s (almost) 200-year-old Brouwerij RODENBACH to release Vibrant P’Ocean, a 4.7% ABV blended sour ale. A beer for the history books, Vibrant P’Ocean is RODENBACH’s first-ever collaborative brew. “As America’s number-one brewer of sour beers, we at Dogfish are absolutely honored to be the first to collaborate and create a beer in partnership with RODENBACH, the world’s most well-respected maker of sour beers,” said Sam Calagione, founder of Dogfish Head. “I’m proud to say that our teams contributed equally on every creative facet of this beer – from the brainstorm to the brew to calibrating the vibrant, red hue of the beer though specific grain and fruit blends. We really took our time and focused on creating a mouth-puckeringly magical drinking experience.”

Vibrant P’Ocean is a complex, ruby-colored beer with tart, dry flavors of jammy berries and floral lemon. To create this trans-oceanic potion, the breweries carefully combined two unique base beers – one developed by RODENBACH and the other by Dogfish Head. RODENBACH’s portion, a two-year, foeder-aged sour from its legendary, standing oak casks, was brewed in Belgium before making its 3,400-mile (or 1,000-nautical league) voyage to Milton, Delaware. There, it was blended with Dogfish Head’s portion, a kettle sour brewed with pilsner malt, malted wheat, elderberry, elderflower, sliced lemons and Belgian fleur-de-sel. Vibrant P’Ocean will be available nationwide in 6pk/12oz cans starting in late January. The breweries are also exploring a future, limited release of Vibrant P’Ocean that will be available in Belgium.

“Our relationship with Dogfish Head blossomed over a few good sour beers and Vibrant P’Ocean captures all that we hoped for in this collaboration,” said Rudi Ghequire, Master Brewer of RODENBACH. “It signifies the vibrancy and mutual respect of our beers and two cultures coming together, inspired by the ocean which connects us. The result is an innovative and refreshing sour beer that captures Dogfish Head’s history of creativity, while staying true to the RODENBACH brand and its oak-aging process which gives RODENBACH its distinctive character.”

Sour and wild-fermented ales is now the fastest-growing style of craft beer, but both Dogfish Head and RODENBACH have been producing and perfecting lip-smackingly tart libations since way before it was considered ‘cool.’ Dogfish Head’s ‘sour story’ began nearly 17 years ago, when Calagione first brewed Festina Lente. A small-batch, spontaneously-fermented beer brewed with more than 400 lbs. of locally-grown peaches, this award-winning wild ale was the brewery’s springboard for entry to the sours category.

In 2016, Dogfish Head released SeaQuench Ale, which quickly became the fastest growing beer in the company’s history. A session sour mash-up of a crisp Kolsch, a salty Gose and a tart Berliner Weiss, this citrusy thirst-slayer holds the title of America’s number-one selling sour beer. After witnessing the continued success of SeaQuench Ale, Dogfish Head put the pedal to the metal on a slew of its other ‘wild’ ideas. In early 2018, the brewery introduced SuperEIGHT, a super Gose made with a bevy of heroic ingredients, including prickly pear, mango, boysenberry, blackberry, raspberry, elderberry, kiwi juices, toasted quinoa and red Hawaiian sea salt. Later that same year, it unveiled its ‘Wooden … it be nice!’ wild beer program and has since released seven small-batch sour beers within the Mid-Atlantic region.

Ironically, it was through its ‘Wooden … it be nice!’ initiative that Dogfish Head and RODENBACH’s relationship began. At an annual meeting of the world’s leading brewers, the Craft Brewers Conference in 2018, Ghequire and the head of Dogfish Head’s ‘Wooden … it be nice!’ wild beer program, Bill Marchi, sat on the same brewing panel. During the conference, fleeting conversations of a future collaboration ensued and – little did they know – the rest would become history. First, Ghequire and members of RODENBACH’s team made a trip to Dogfish Head’s production facility in Delaware to further solidify the breweries’ partnership. Brainstorming continued and then, Calagione and members of Dogfish Head’s team visited RODENBACH’s brewery in Roeselare, Belgium, to finalize the details for Vibrant P’Ocean. During that trip, Calagione and Ghequire spent time touring RODENBACH’s legendary brewery and cooperage, sampling traditional cuisine from the surrounding region, learning about the country’s brewing history and soaking up every possible drop of inspiration.

“It’s a little-known secret that the acidity levels in a sessionable sour beer, such as RODENBACH Classic, SeaQuench Ale and now, Vibrant P’Ocean, offer consumers a delicious beer experience with a higher level of refreshment,” added Ghequire. “Generations of Belgians have known this to be true, and we’re excited that American consumers have the opportunity to try and enjoy even more quality-produced sessionable sours.”

“Dogfish Head’s journey with RODENBACH sure has been a memorable one,” said Calagione. “I am so eager for Vibrant P’Ocean to be released and to enjoy a celebratory six-pack with Rudi and the co-workers that make up our brewing teams.”

Dogfish Head has proudly focused on brewing beers with culinary ingredients outside the Reinheitsgebot since the day it opened as the smallest American craft brewery nearly 25 years ago. Dogfish Head has grown into a top-20 craft brewery and won numerous awards throughout the years, including Wine Enthusiast’s 2015 Brewery of the Year and the James Beard Foundation Award for 2017 Outstanding Wine, Spirits, or Beer Professional. A Delaware-based brand with Dogfish Head Brewings & Eats, an off-centered brewpub and distillery, Chesapeake & Maine, a geographically-enamored seafood restaurant, Dogfish Inn, a beer-themed inn on the harbor, and Dogfish Head Craft Brewery, a production brewery and distillery featuring the Tasting Room & Kitchen and Dogfish Head Distilling Co., Dogfish Head is a supporter of the Independent Craft Brewing Seal, the definitive icon for American craft breweries to identify themselves to be independently-owned and carry the torch of transparency, brewing innovation and the freedom of choice originally forged by brewing community pioneers. Dogfish Head currently sells beer in 45 states and Washington D.C. For more information, visit www.dogfish.com, Facebook: @dogfishheadbeer, Twitter: @dogfishbeer, and Instagram: @dogfishhead.

Brewed in West Flanders region of Belgium since 1821, BROUWERIJ RODENBACH is arguably the most awarded brewery in the world, the leading craft brewer of oak-aged mixed-fermentation ale and revered by beer drinkers, globally. The beer is aged among the brewery’s 294 oak casks (“foeders”) for a minimum of 2 years, before master brewer Rudi Ghequire expertly crafts a perfectly balanced and refreshing beer that pairs exceptionally well with food.  First gaining international acclaim at the 1894 World’s Fair in Antwerp, RODENBACH has gone on to win Gold medals from the most reputable critics and publications in the world including World’s Best Sour Beer (2018, World Beer Awards).  For more information, visit www.sfbimports.com or www.rodenbach.be or Instagram @Rodenbach_NA.

« This Weekend! Love on Tap