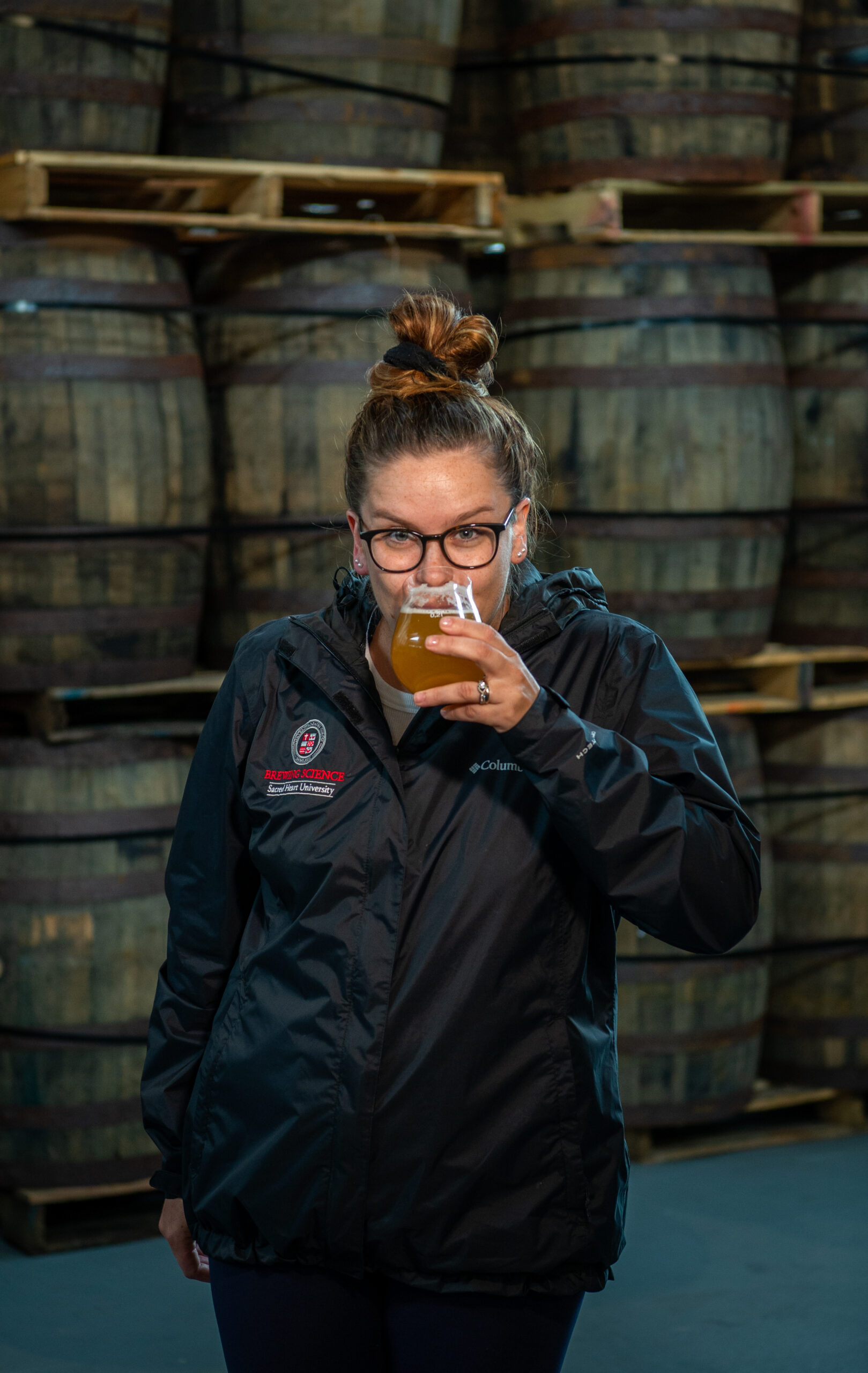 Sacred Heart University has partnered with Back East Brewing Company and the state chapter of the Pink Boots Society to develop a new scholarship for women who want to enter the brewing industry. Each partner will contribute half of the scholarship amount.

The Pink Boots Society is a global, nonprofit organization that inspires and encourages women in the alcoholic beverage industry to advance their careers through education. The organization started in Oregon and now has chapters throughout the United States, Europe and South America.

“We couldn’t be more ecstatic about the CT Pink Boots Society Scholarship for Women in Brewing,” said Vinny Cataudella, associate dean for success and engagement at St. Vincent’s College. “We share the commitment the Pink Boots Society has to help women advance their careers through education and are proud that SHU’s brewing science certificate program can provide a vehicle for women looking to start or advance their careers in the brewing industry. This scholarship will help further diversify the student body within the program and, as a result, the industry overall.”

Mariah Billian and Abby Bibens are co-leaders of Connecticut’s Pink Boots Society chapter. Billian, of Waterford, is tap room manager at Outer Light Brewery in Groton, and Bibens, of Glastonbury, worked for a number of years in the CT craft beer industry, and is currently the tap room manager at Hop Culture Farms & Brew Co. in Colchester.

Billian previously worked in the restaurant industry and was also a pastry chef. She said she always had a love for beer, so when an opportunity opened up at Outer Light, she decided that was the career she wanted to pursue. “I’m so glad I made that change; I made the right choice,” she said.

Similarly, Bibens worked at a liquor store when she was younger while pursuing other career paths. She enjoyed sharing, tasting and trading beer with a friend, she said, and eventually the hobby turned into a passion and then a career.

Bibens and Billian became involved with the state’s Pink Boots Society chapter in 2018. They have since enjoyed the organization’s good work and the camaraderie it creates. Women gain a sense of belonging, they said. Their opinions and voices are heard, and they can be passionate about beer or alcohol without feeling judged.

“I love engaging with people and helping them better themselves,” Bibens said.

According to the publication BrewBound, many women in the beer industry have experienced toxic work environments. Several stories about abuse and harassment have come to light this year alone. When Billian and Bibens discussed the issue with the Connecticut Brewers Guild president, Phil Pappas, the idea of starting a scholarship with SHU—similar to the NEBCO African American Brewers Scholarship and the Athletic Brewing Company Scholarship, both of which support African Americans in the industry—came up. The two women took the idea to the Pink Boots’ national chapter and decided they could not pass up the opportunity to create a scholarship for women.

“After speaking with the Pink Boots national chapter, we realized we never offered a scholarship on this level before,” Billian said. Connecticut’s Pink Boots Society chapter previously had sponsored fundraisers to supported scholarships, but it never helped fund one in full.

“We’re excited,” said Bibens. “This is an opportunity to encourage more women to be part of the brew industry and to have a voice. Now women in the industry can confidently say, ‘I went to school; I know what I’m talking about.’ Everyone is on the same level.”

The scholarship will help fuel equality among industry professionals, and once everyone sees that, “wonderful things can be achieved,” Bibens said.

Bibens and Billian are happy to have a supportive partner like Back East Brewing. “They are great people,” Bibens said. “We’re really excited to work with them.”

Tony Karlowicz and his cousin, Edward Fabrycki, Jr., dreamed about opening a craft brewery in the early 2000s.They home-brewed beer, experimented with recipes and made sure they were experts in the field before they opened their brewery in Bloomfield in 2012. They are known throughout the region for their Ice Cream Man IPA and Double Scoop Double IPA.

“When we opened, we were one of about seven in the state, and now we’re one of 100-plus,” Karlowicz said. He noted the industry’s rapid growth but acknowledged it must be inclusive. “It doesn’t matter who you are; if you like beer, there shouldn’t be any barriers to getting in the industry,” he said.

Back East Brewing Company has given back to its community through fundraisers and other charitable events since it opened, Karlowicz said. When the two partners saw that New England Brewing Company established an African-American Brewers Scholarship, they were impressed. They realized they could do something for women in the industry and were pleased to partner with the state’s Pink Boots Society to create the new scholarship.

Karlowicz echoed Bibens and Billian’s thoughts on education. “We feel strongly about Sacred Heart’s certification program,” he said. “It’s important for people who want to get into the industry to learn the science and much more behind brewing.”

SHU’s brewing science certificate is a valuable gateway to the brewing industry and a means for those already in the industry to bolster their résumé with a broad array of skills rooted in brewing science. The program includes training in scientific brewing theory, ingredient science and recipe design, beer styles, sensory analysis science, brewery management, sanitation and safety, among other subjects.

To be considered for this scholarship, a female student must be admitted into the brewing science certificate program and identify as female or non-binary. Priority consideration will be given to students who reside in Connecticut and demonstrate financial need, as determined by submission of the free application for federal student aid.

« The U.S. States with the Most Christmas Spirit

5 Ways to Make Holidays Enjoyable While on a Period »