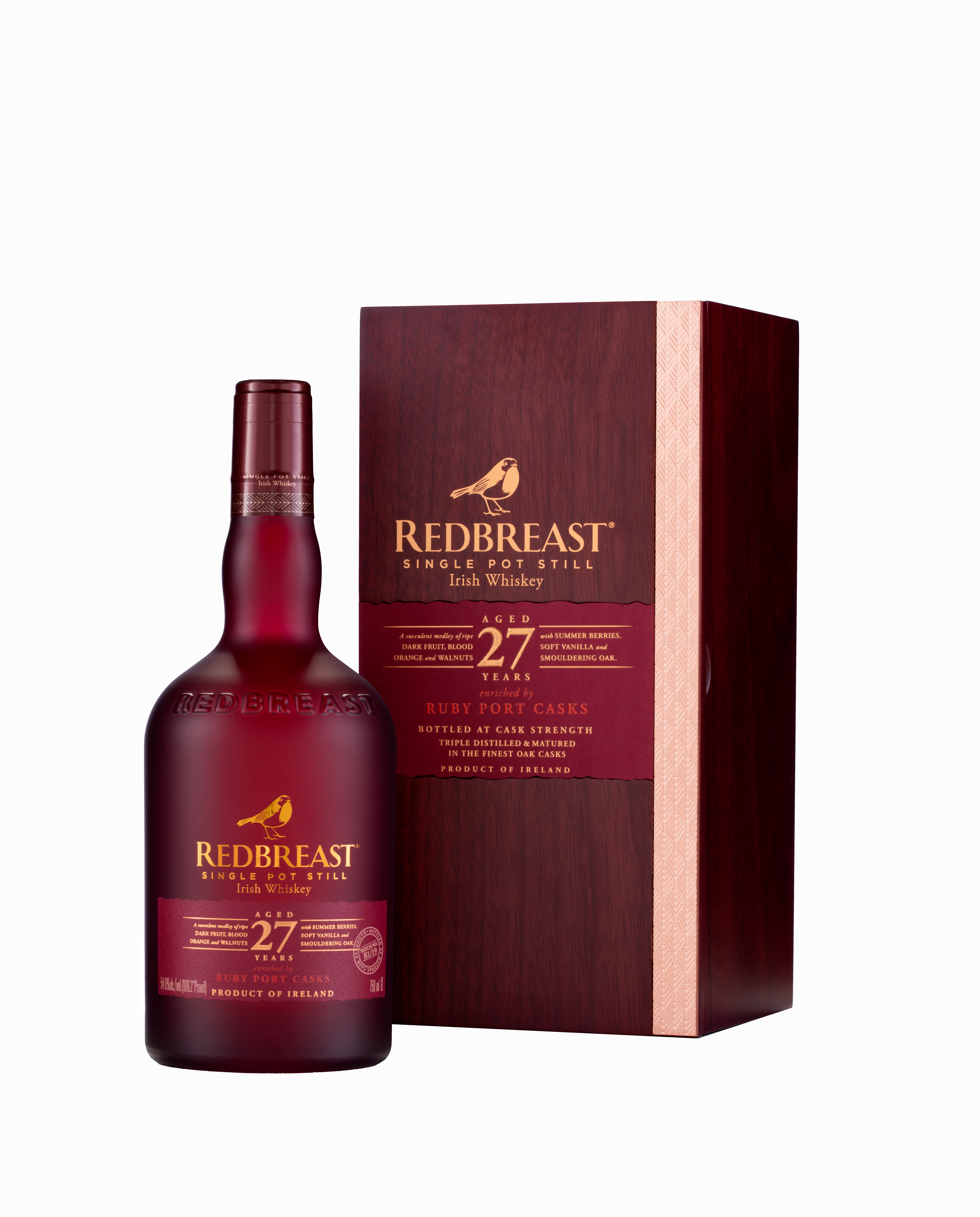 Redbreast® Single Pot Still Irish Whiskey, makers of some of the world’s most enjoyed whiskeys, has introduced Redbreast 27 Year Old, the oldest permanent expression in the beloved Redbreast series. An iconic addition to the collection, Redbreast 27 Year Old includes a portion of whiskey that was matured in ruby port barrels from Portugal’s Douro Valley to bring a new complexity and depth to the Redbreast collection.

Redbreast 27 Year Old will join Redbreast 12, 15, 21 Year Old and Lustau, taking its position at the head of the family with its distinguished age statement. Spending 27 years maturing under the watchful eyes of the team at Midleton distillery, it was Master Blender Billy Leighton and Blender Dave McCabe who set their sights on building further on the celebrated foundation of bourbon and sherry casks so synonymous with Redbreast with the addition of a ruby port cask.

For over 30 years, the team at Midleton has travelled to the Douro Valley in Portugal, where port has been produced for two thousand years, to discover the finest caves in the region in a quest to provide drinkers with a truly unique taste experience. After sourcing ruby port casks, the masters filled them with pot still distillate before leaving them to mature, then combined them with whiskey aged in bourbon and sherry barrels.   The ruby port barrels impart fleshy fruit characteristics with notes of toasted oak which complements the rich and robust style of the distillate.

“It gives us great pleasure to reveal the latest member of the Redbreast Irish Whiskey family,” says Master Blender Billy Leighton. “In creating this whiskey, Dave and I drew on our experience of working with sherry and other wine casks over the years as we have evolved the range. This time, we wanted to push the boundaries and yet create an expression that would seamlessly take its place at the head of the family.  Nearly three decades in the making, we are incredibly proud to present Redbreast 27 Year Old – a cask strength Redbreast expression that is a joy to behold in each and every sip.”

Blender Dave McCabe adds: “Bottled at 54.6% cask strength, the ruby port barrels contribute notes of mango, pineapple and berry to the robust flavor of Redbreast 27 Year Old, clearly distinguishing it from the previous expressions in the collection, treading a beautiful balance of tradition and innovation.”

“Redbreast 27 Year Old showcases why and how, tradition and innovation continue to be of significance to whiskey aficionados and new whiskey drinkers alike,” says Sona Bajaria, Vice President of Marketing, High End Irish Whiskeys at Pernod Ricard USA. “We know that when consumers land on Redbreast, they fall in love and want to pass it along to friends, family, and those who share a love for premium whiskies. Redbreast is the standard bearer of premium Single Pot Still Irish Whiskey and the new 27 Year old expression celebrates our heritage with an experience worth the journey of nearly three decades.”

Nose: A mix of exotic fruits and red berries, complemented by fresh herbs and wood spices. Vanilla sweetness and treacle toffee combine with the nuttiness of toasted oak.

Taste: Incredibly rich in texture with a luxurious combination of ripe stone fruits and summer berries, balanced by the prickle of a hint of chilli oil. Cherry menthol, vanilla and cinnamon sweet spices complement red pepper, nutmeg and toasted oak.

Finish: A satisfyingly long balance of ripe fruit and wood spices, worthy of a journey of nearly three decades.

Pernod Ricard is the No.2 worldwide producer of wines and spirits with consolidated sales of €9,182 million in FY19. Created in 1975 by the merger of Ricard and Pernod, the Group has developed through organic growth and acquisitions: Seagram (2001), Allied Domecq (2005) and Vin&Sprit (2008). Pernod Ricard, which owns 16 of the Top 100 Spirits Brands, holds one of the most prestigious and comprehensive brand portfolios in the industry, including: Absolut Vodka, Ricard pastis, Ballantine’s, Chivas Regal, Royal Salute, and The Glenlivet Scotch whiskies, Jameson Irish whiskey, Martell cognac, Havana Club rum, Beefeater gin, Malibu liqueur, Mumm and Perrier-Jouët champagnes, as well Jacob’s Creek, Brancott Estate, Campo Viejo, and Kenwood wines. Pernod Ricard’s brands are distributed across 160+ markets and by its own salesforce in 73 markets. The Group’s decentralised organisation empowers its 19,000 employees to be true on-the-ground ambassadors of its vision of “Créateurs de Convivialité.” As reaffirmed by the Group’s three-year strategic plan, “Transform and Accelerate,” deployed in 2018, Pernod Ricard’s strategy focuses on investing in long-term, profitable growth for all stakeholders. The Group remains true to its three founding values: entrepreneurial spirit, mutual trust, and a strong sense of ethics. As illustrated by the 2030 roadmap supporting the United Nations Sustainable Development Goals (SDGs), “We bring good times from a good place.” In recognition of Pernod Ricard’s strong commitment to sustainable development and responsible consumption, it has received a Gold rating from Ecovadis and is ranked No. 1 in the beverage sector in Vigeo Eiris. Pernod Ricard is also a United Nation’s Global Compact LEAD company.

The Nancy Pelosi, A Cocktail in Honor of International Women’s Day »