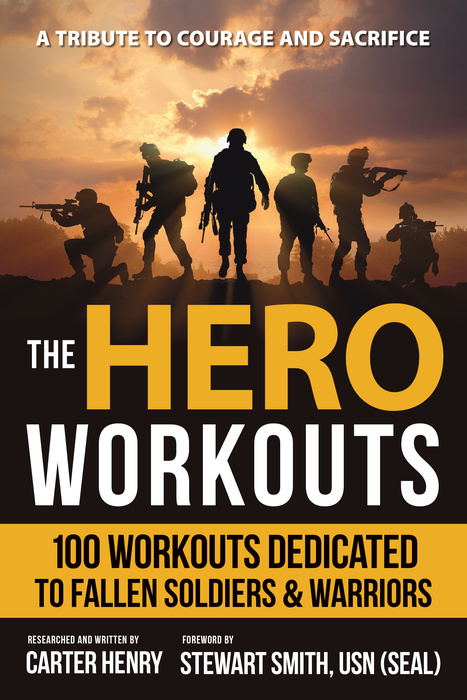 Vacations, BBQ’s, and friends come to mind often when MEMORIAL Day is mentioned. I recently came across The Hero Workouts, a new book that presents a collection of these honorific workouts dedicated to their memory.

The Hero Workouts by Carter Henry features over 100 workouts each named for a fallen hero or group of soldiers and includes the story of their personal lives and battle action. The story behind The Hero Workouts is one that needs to be told. Each workout is named after a fallen soldier.
Started in the Crossfit community, The Hero Workouts are rooted in honor. By participating in these workouts, one gains the opportunity to revere an individual who has made the ultimate sacrifice. Taking the time to remember these men and women or to learn who they were can be part of a healing process, either on a personal level or in response to a collective loss we all feel.

I plan to give this a shot. Here’s a quick excerpt and workout for you to try this Memorial Day:

Honor the Fallen this Memorial Day with the Hero Workout

2007 was the deadliest year of the war in Iraq for the United States Armed Forces, and cost the lives of 904 American service members. Eight of those men were serving in Company Bravo, 1st Battalion, 8th Calvary Regiment, 2nd Brigade Combat Team, 1st Cavalry Division, based at Fort Hood in Texas. They were also simply called, “The Legion”.

On March 15 of that year, their unit was on patrol when another vehicle was hit by an improvised explosive device. The Soldiers dismounted to clear the area when a second bomb detonated. Specialist Arnold, Sergeant Brand, Staff Sergeant Harris, and Staff Sergeant Prater were instantly killed; Sergeants Lightner and Green were gravely injured. Specialist Coon ran under fire to help them, applying tourniquets to stop the bleeding. In spite of surviving the evacuation, both men died of their injuries within a few days. Nearly three weeks later, Specialist Coon was shot in the head during a patrol, and Sergeant Christopher was killed in June by another IED. For their sacrifice, all eight men were awarded the Bronze Star and Purple Heart medals.

Legion 8 workout events pay tribute to these eight Soldiers, carrying on their memory and raising funds to benefit local military charities. To make a donation or to sign up for an event, please visit www.Legion8.com.

Excerpt from The Hero Workouts (2017). Printed with permission by Hatherleigh Press, Ltd.

Buy the book on Amazon.

Happy Memorial Day to our brave men and women!