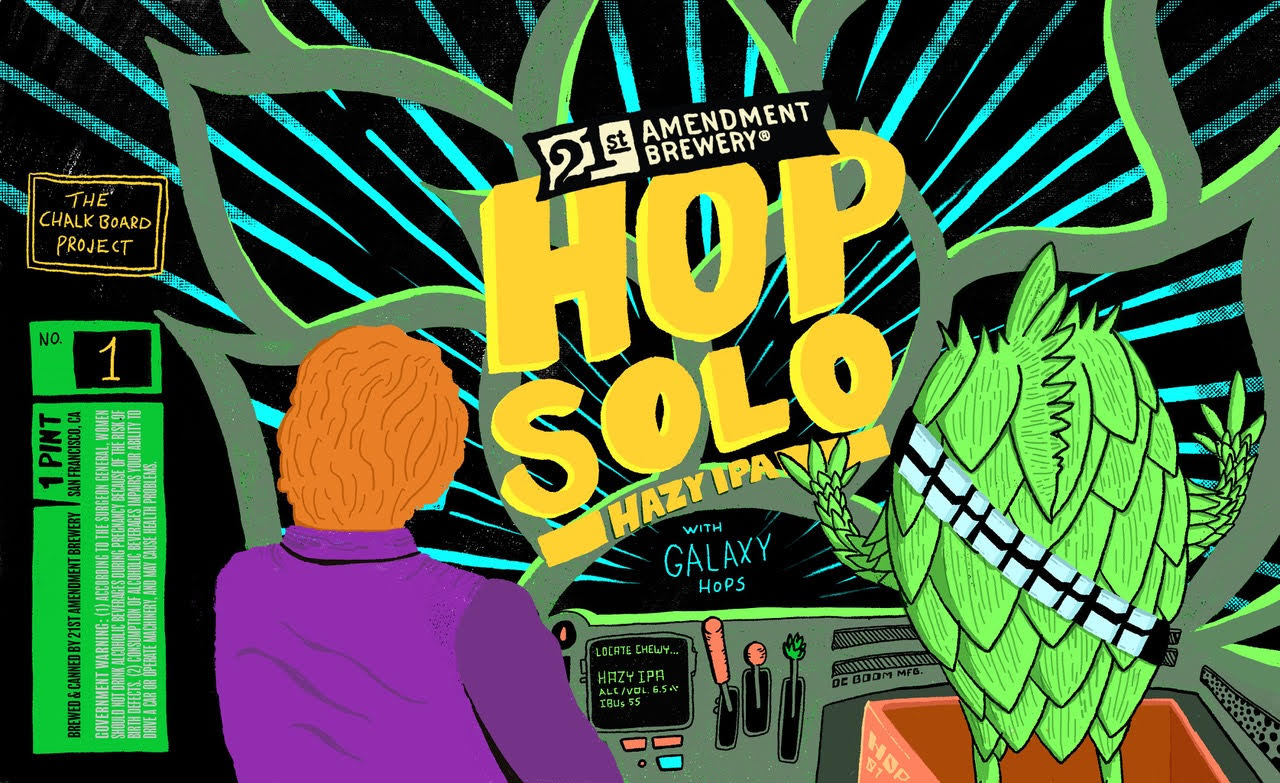 The 21st Amendment Brewery launches an exclusive San Francisco brewpub series the CHALKBOARD PROJECT featuring astonishingly fresh 21st Amendment limited-edition beers (16 oz. cans in 4-packs) that commemorate the creative minds behind chalkboard designs for thousands of beers at breweries across the country. The series debuts with Hop Solo Hazy IPA (6.5% ABV), a lush Galaxy hop-forward stunner set to be released within 24 hours of being brewed and packaged. Hop Solo Hazy IPA will be available while supplies last at the San Francisco Brewpub, San Leandro Tap Room, and statewide via direct shipping at 21st-amendment.com on Wednesday, November 25, 2020.

Since 2000, the 21st Amendment Brewpub located just blocks from the SF Giants ballpark has been home to hundreds of out-of-this-world beers brewed for the City and residents of the San Francisco Bay Area. Every small batch beer has an originally crafted chalkboard design that hangs as the backdrop to the iconic SoMA bar. The CHALKBOARD PROJECT brings Shaun O’Sullivan (Co-Founder and Brewmaster, 21st Amendment Brewery) back to where it all began to their 12-barrel brewhouse to concoct innovative beers paired with inspiring chalkboard artwork. For their maiden release, Hop Solo Hazy IPA showcases the hand-drawn label from 21st Amendment’s Head of Creative Design Ben Kinzer; an official judge at the 2021 Craft Beer Marketing Awards (Craft Brewers Conference 2021).

Hop Solo Hazy IPA (6.5% ABV)A short time ago, in a brewery local to California… Hop Solo Hazy IPA was conceived. The Evil Macro Empire has again set out to extinguish the Craft Rebel Alliance and create confusion among craft beer drinkers. Hop Solo and his trusty compatriot Chewy (the Hop Wookie) aboard the faithful Lupulin Falcon are custodians of a recipe for a Hazy IPA with the newest varieties of hops to engage the palates of craft drinkers throughout the galaxy. They must find a local independent craft brewery that can use this recipe and bring flavor and restore enjoyment to the galaxy… 21st Amendment’s brewpub is said brewery for this luscious hazy IPA.

Galaxy hops are the showstopper for the inaugural 16 oz. can of the CHALKBOARD PROJECT with robust hop flavors coupled with a lingering hop savory tang on the finish. Hop Solo Hazy IPA teems with bright and beautiful citrus, peach and passionfruit aromas while a light tart flavor orbits sweet malt notes wrapped in a full creamy texture.

The label artwork for Hop Solo Hazy IPA is a nod to O’Sullivan brewing solo while producing adventurous new releases for the CHALKBOARD PROJECT. Each beer in the new series specializes in a different featured hop. Once the limited run of beers are gone, it’s time to wipe the slate and start fresh, highlighting the temporary nature of both the beers and the artwork.
Live in the moment and enjoy them while they last!

The Perfect Sausage Egg and Cheese »