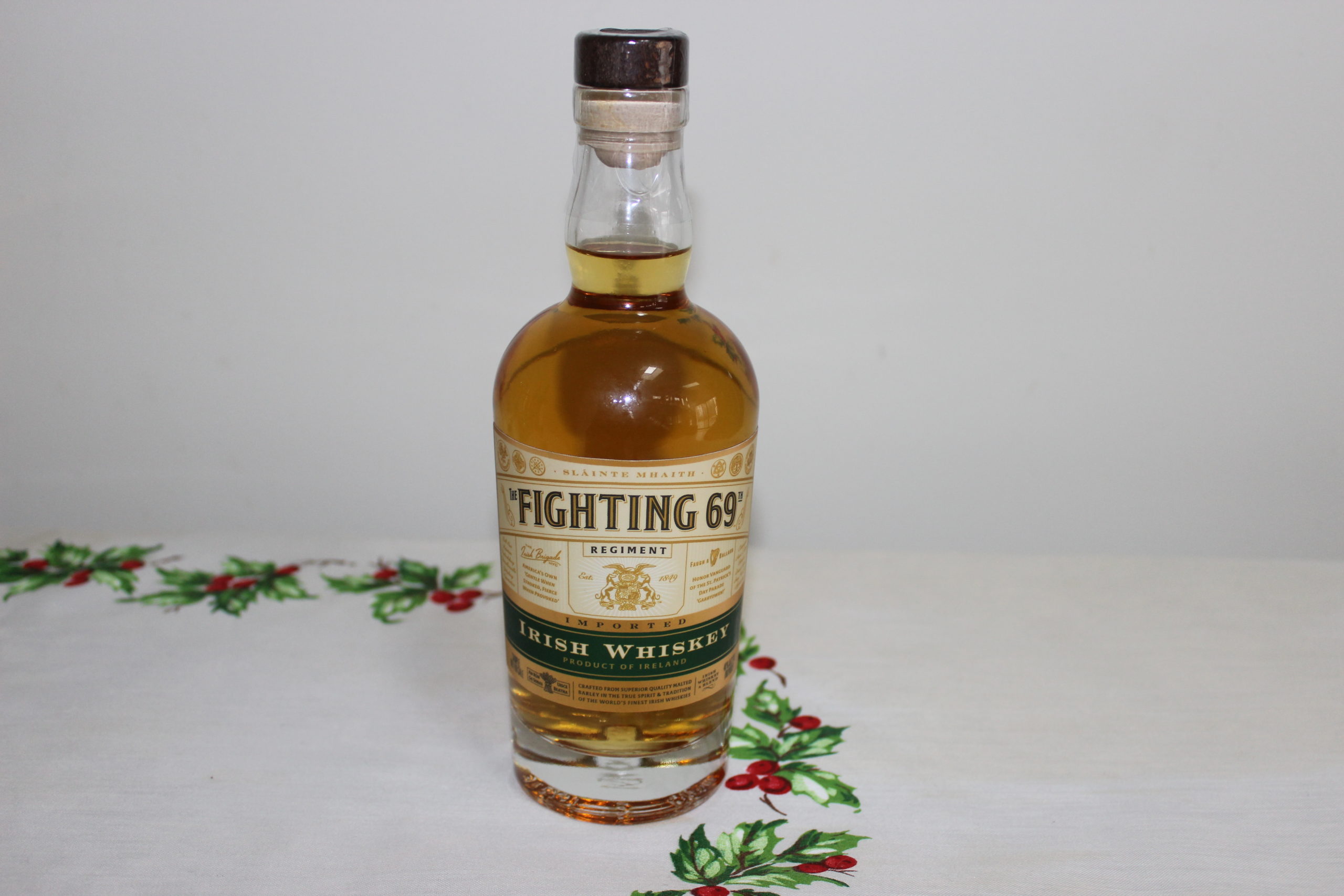 The Fighting 69th Irish Whiskey Pays Tribute to Famed “Irish Brigade”
Since 1851 the officers of the famed 69th Regiment have kicked off their responsibilities as lead unit in New York City’s St. Patrick’s Day Parade by raising a glass of Irish whiskey in a traditional toast. When they do it for the 169th time in 2020 it will be with a special Irish whiskey named after their own storied infantry regiment.

The concept for a special Irish whiskey dedicated to the 69th was the brainchild of Colonel (Ret) James Tierney, a former officer in the unit and a Trustee of its non-profit Historical Trust. Having also served for ten years as the 69th Regimental Historian, the idea came to him during one of his many visits to Ireland.

“With our strong Irish heritage, members of the 69th are invited to Waterford, Ireland each year to participate in the annual Tricolour Celebration, which marks the creation in 1848 of the flag that would eventually become the Irish Republic’s National flag,” recalled Tierney. “It’s been my honor to attend the celebration frequently and a few years ago, while enjoying the festivities with a taste of local whiskey, it occurred to me that the Fighting 69th should have its own Irish whiskey.”

While that seemed like a logical enough idea, it took, well, a little bit of the luck of the Irish to see it come to fruition.

“I approached a few distilleries with the concept and while nearly all expressed some initial interest, nothing really became of it,” Tierney explained.

It was then that fate played a hand in the shape of a special visitor to the 69th Regiment Armory in the Flat Iron section of Manhattan who happened to have a long history in the spirits industry.

“A partner of The Espiritus Group, a spirits development and marketing company, was touring the armory and I mentioned the idea of a Fighting 69th Irish whiskey. He was immediately intrigued, and we set about to make it happen,” said Tierney.

Scott Reid, chief marketing officer for The Espiritus Group, explains that the company’s leadership team are strong supporters of the United States military and quickly embraced the idea of an Irish whiskey for America’s pre-eminent Irish heritage army unit.

“It made total sense,” Reid said. “Some of the finest whiskies in the world come from Ireland and the category is currently on fire. To be able to help create a great whiskey brand and have it associated with a military unit with the reputation and tradition of the 69th Infantry Regiment was an opportunity we simply couldn’t allow to pass by.”

The Fighting 69th Irish Whiskey is being produced in conjunction with the 69th Infantry Regiment Historical Trust, which is a non-profit 501 (c) (3) entity. A portion of the sale of each bottle sold will benefit the trust and support its historic preservation mission as well as philanthropic activities on behalf of the Regiment’s veterans and their families.

“We are excited to be launching this fine Irish whiskey in partnership with the Fighting 69th; putting our sales and marketing capabilities behind this very special brand,” said Jay Maltby, chairman of Espiritus. “This brand will do great things for the 69th Regiment Historical Trust by supporting its overall mission.”

Chuck Chand, COO of Espiritus added, “We are launching this brand in a vibrant category with a strong sales and marketing foundation. We look forward to everyone discovering and enjoying our finely crafted whiskey.”

Describing the taste of the whiskey, Reid noted that it is medium-bodied and bright and lively on the palate with a smooth and complex finish that allows for a delightful experience.

“I would describe the whiskey as being very much like the motto of the Fighting 69th Regiment: Gentle when stroked, fierce when provoked,” Reid said.

The 69th Infantry Regiment has a long and storied history. Seven of its members have received the Medal of Honor, an exceptionally large number of recipients for a National Guard Unit. Its wartime exploits have been memorialized in books and popular culture including the 1940 Warner Brothers movie “The Fighting 69th” starring James Cagney and Pat O’Brien. Among the more famous members of the unit are William J. “Wild Bill” Donovan who went on to establish the Office of Strategic Services – the precursor of the CIA – during World War II; Joyce Kilmer, the American writer and poet; and Father Francis Patrick Duffy (Fearless Father Duffy) whose statue is in Times Square, and Thomas Francis Meagher, the Irish patriot, who led Meagher’s Irish Brigade during the American Civil War.

About the 69th Infantry Regiment:

The 69th Infantry Regiment is an infantry regiment of the United States Army. It is from New York City, part of the New York Army National Guard. It is known as the “Fighting Sixty-Ninth,” a name said to have been given by Robert E. Lee during the Civil War. An Irish heritage unit, as the citation from poet Joyce Kilmer illustrates, this unit is also nicknamed the “Fighting Irish,” immortalized in Joyce Kilmer’s poem When the 69th Comes Home. Between 1917 and 1992, it was also designated as the 165th Infantry Regiment. It is headquartered at the 69th Regiment Armory on Lexington Avenue in Manhattan.

The regiment currently consists of a single light infantry battalion (1st Battalion, 69th Infantry Regiment) and is part of the 27th Infantry Brigade of the 42nd Infantry Division. The Regiments’ history dates back to 1849, when it was created as the 9th Regiment New York State Militia. Company “A”, 1/69 traces lineage back to the American Revolution as one of several National Guard units with colonial roots. The regiment has seen combat in five wars: the American Civil War, World War I, World War II, the Iraq War and in Afghanistan. It was also activated in 1898 for the Spanish American War and in 1916 for the Mexican Border Campaign. It has received so many Unit Citations, once recognized with silver rings, that the staff of its regimental colors is authorized to be one foot longer than normal to accommodate them all. The 69th self-activated on 9/11/2001 in response to the World Trade Center attack and was the first military unit on site. It was eventually put on official orders. October 29, 2019 marked the 15th anniversary of the 69th “going over the berm” as Task Force Wolfhound from Kuwait into Iraq for a year-long deployment in country.

The Espiritus Group is a fully integrated sales and marketing company specializing in developing and launching premium spirit brands with expertise in distribution, production, sourcing, logistics, packaging and finance. Founded by industry veterans Jay Maltby and Chuck Chand, The Espiritus Group is a team of spirits entrepreneurs, investors and operating partners who have deep experience in the drinks industry. The company is headquartered in Palm Beach Gardens, Florida.